An Atmosphere for Space Education 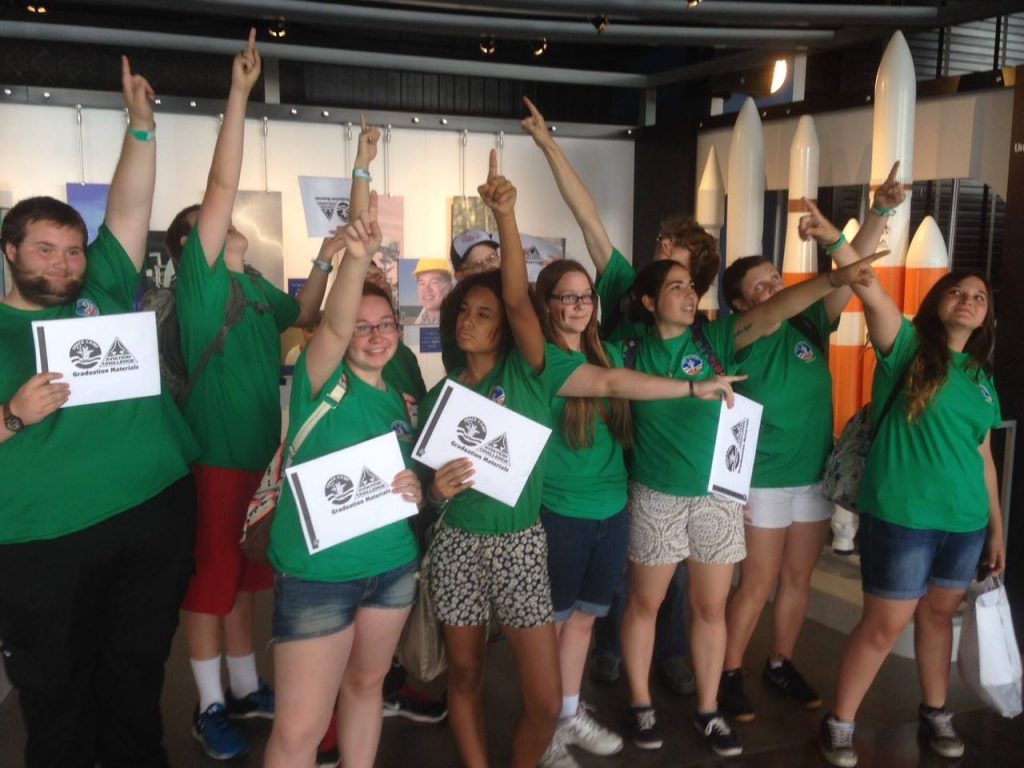 Outer space can feel like a giant leap for a kid who has never even traveled across the country.

But for a group of North Idaho high school students, two Upward Bound programs run by the University of Idaho have put the stars within reach.

Over the past two summers, about 40 students experienced simulated space flight and zero gravity at NASA’s Space Camp in Huntsville, Alabama — the culmination of a curriculum meant to spark their interest in the science, technology, engineering and mathematics (STEM) fields.

The Upward Bound project is one of seven federally funded TRIO projects that are operated by the UI College of Education as a means to provide educational opportunities for all Americans regardless of race, ethnic background or economic status. The space-themed program began in summer 2015. A group of students from Kellogg and Wallace spent time at UI’s Moscow campus and North Idaho College in Coeur d’Alene to study sociology, science, literature and foreign language, all with a space emphasis. The success of the curriculum spawned its adoption by another Upward Bound program, Bridge Idaho, in 2016.

Upward Bound is designed to take first-generation college students out of their comfort zones so they realize what it might be like to visit a different region or try out a new field of study. In many cases, Bridge Idaho Upward Bound Director Andrea Brockmeyer said such ideas give the students a realization that they can “handle it.” Putting aspiring astronauts in different settings, whether that be at a college campus or a far-away flight simulator, helps them develop a sense of autonomy and resilience so they can plan for the future, she said.

As part of their six-week study, the Silver Valley students helped build a terraforming robot — one that would erect basic structures out of rocks, sand and dirt — with representatives from nonprofit design laboratory Gizmo-CDA. They also read Ray Bradbury’s “The Martian Chronicles” and debated how best to set up their own society during a fictional two-year excursion to the red planet.

Students wrote journal entries and a 32-page manual to highlight the fictional mission. Among their most pressing concerns were what freeze-dried food they wanted to bring on the six-month expedition to Mars and what kind of entertainment (karaoke, pool and laser tag) they would have available.

“We did the whole summer program around that theme, so you have to pass that class to go to Space Camp,” Horan said. “Which is a pretty effective motivator.”

The students even brainstormed the creation of a dome-like building connected to their spacecraft that would serve as home base on the new planet. And they each jotted down journal entries focused on their encounters with alien life.

“All the Martians I’ve seen so far are very mean,” per one journal entry. “I’m thinking they have some unresolved family issues that they need to talk about. Or maybe they are just scared because they haven’t seen any other creatures besides themselves.”

But it was the Space Camp week at NASA’s U.S. Space and Rocket Center where the students learned valuable hands-on interplanetary lessons based on science and math concepts. The young astronauts even had to deal with defeat during the occasions they didn’t survive their simulations. Experiments involving everything from zero gravity to scuba diving to being firmly planted at mission control helped the students figure out how to function as a NASA team.

Ten Silver Valley students made the weeklong trip to Huntsville in July 2015 with the help of a grant from the NASA Idaho Space Grant Consortium, which is operated out of UI. The students earned college credit, lived in pods, and met students from New Zealand and Sweden.

While the Upward Bound students may not ultimately choose to pursue a career in a STEM field, Horan said the program ignited an interest in the sciences. While Upward Bound programs focus on a different curriculum each summer, both she and Brockmeyer said they’d launch the space idea again if funding permits.

“That curiosity to engage in the world around them is a trait I see in those who have participated in the program,” Horan said.

The curriculum’s success prompted Brockmeyer to take a group of students to Huntsville in July 2016 as part of a space/civil rights curriculum through Bridge Idaho Upward Bound.

About 30 sophomores, juniors and seniors from Kamiah, Kooskia, Lapwai and Orofino made the journey to Huntsville last summer. They also visited Birmingham, Alabama, and Nashville, Tennessee.

Getting high school kids interested in science is no easy task, Brockmeyer said. But allowing them to “geek out” for a week at the U.S. Space and Rocket Center helped them along.

“A couple of students got their geek on,” Brockmeyer said. “It’s not cool to like math or science, so with this kind of experience they did get to see their potential with science and math.”

The trip also acts as a draw to help the students see the benefits of higher education — and help them work through any barriers to their college dreams, she said.

Brockmeyer wants the students to say to themselves, “I did this on my own for six weeks in the summertime. I totally can do this for four years and get a degree.”