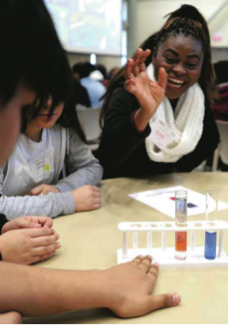 By LINDSEY JOHNSON
ljohnson@postregister.com
Editor’s note: The story has been updated to correct the attribution of two quotes from Ramiro Diaz to Eric Olvera.

Three buses carrying nearly 100 students from all over the state arrived Friday morning at the Idaho National Laboratory to start the first INL Multicultural Leaders in STEM event.

INL K-12 STEM partnered with TRiO on the event in an effort to reach out to minority, underserved and potential first-generation college students from 30 high schools throughout the state.

In 2016, INL received positive feedback after hosting high school students from throughout the region at the My Brother’s Keeper initiative, which was introduced by former President Barack Obama in 2014.

“One of the biggest challenges our industry faces is acquiring and developing an inclusive workforce,” said Toni Carter, INL director of Inclusion and Diversity. “Engaging students early in the educational process ensures they are aware of the opportunities available to them, while helping them prepare for the future.”

TRiO is a federally funded program that provides low-income students with a variety of support services including advising, counseling and tutoring.

To participate in TRiO, students must meet at least one of the eligibility requirements, which are meeting federal low income guidelines, being a potential or currently enrolled first-generation college student, having a documented disability or having a need for several services within the program.

Idaho Falls High School sophomore Eric Olvera , 16, will be the first in his family to attend college.

“It’s just exciting to me to go and get a better career, because that’s what my parents want and that’s what I would want for my future and my kids,” Olvera said.

About 20 research scientists, engineers, technicians and volunteers from INL and TRiO made presentations and conducted hands-on STEM-related experiments with the students.

Event organizers sought to include students from rural areas who normally would not have the opportunity to participate in similar hands-on activities.

Jimena Serna, an Aberdeen High School freshman, said there are only about 300 students in her high school, and that the classes offered don’t match that of bigger high schools.

“Some of the kids were talking about how they did (the experiments) in class already, and we don’t do any of that in our class(es),” Serna said.

Serna would be the first in her family to attend college.

“I really like how they’re trying to motivate the younger people to go into the STEM fields,” Olvera said. “I think that’s really cool because I love science and I think it’s really important.”

TRiO Assistant Director Cheryl Zimmer said the event gives students exposure to INL, which for many is the first step toward a STEM career.

She said if students don’t succeed in math classes, they’re less likely to enroll in upper level science classes which will lead them into STEM.

Friday, the students traveled to Idaho State University in Pocatello where they were taken on a campus tour. After spending the night in Idaho Falls and attending the STEM event at INL, the students will spend Saturday at The Museum of Idaho and ISU-Idaho Falls, located at University Place.

President Donald Trump’s 2018 budget proposal calls for nearly $200 million in cuts to TRiO and Gear Up, another program that helps disadvantaged students prepare for high school, according to the Washington Post.

“We decided no matter what happens in this administration, diversity is a focus and inclusion is a focus of our laboratory,” Seifert said.

“As a K-12 team, we want to do our part to create a diverse workforce,” Seifert said. “Because with diversity comes diversity of thought, which drives innovation.”